Soleimani's death: US calls on its citizens to leave Iraq

Share
byTheTeamJanuary 03, 2020
The American embassy in Baghdad, attacked Tuesday by pro-Iranians, called on Friday for its nationals to leave Iraq "immediately", a few hours after the assassination of the powerful Iranian general Qassem Soleimani in an American raid. 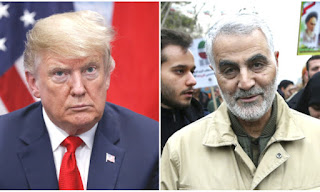 The chancellery is calling on Americans in Iraq to leave "by plane as long as possible", while the raid took place within the Baghdad airport compound, "if not to other countries by land". Iraq's main border crossings lead to Iran and Syria at war, while other crossing points exist to Saudi Arabia and Turkey.
Comments Post a Comment
Reactions
Newer
Older