The new Apple Watch now has a permanent display that decreases, instead of disappearing, when you lower your arm. Finally, almost like a real watch. All Apple Watch faces are set to the new screen, making it easy to view your training stats without having to lift your wrist. Or, you know, take a look at once in the middle of a boring meeting, just like your colleagues with analog watches. 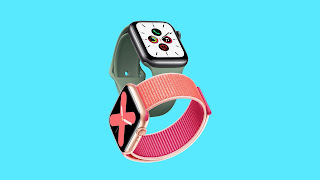 Despite its permanent screen, Apple claims the same 18-hour battery life "all day" as previous models. The energy savings come from a new, low-power display driver, which could one day end up on other Apple devices.


Also, the Apple Watch Series 5 is now available in a recycled aluminum or titanium finishes. The stainless steel and ceramic options from previous models are also available. Apple says this is the widest number of finishes ever for the Watch.

The other new feature include a built-in compass and emergency calling for international countries.

According to Apple, the Series 5's price starts at $399 for GPS model and $499 for the cellular connected version.