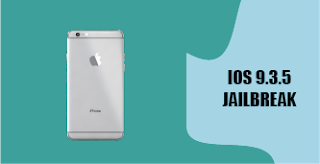 In a previous article, we mentioned that jailbreak is ready to deliver by a Dev called Stfan Esser.
But now, another Dev ( Tihmstar ) has succeeded in jailbreaking IOS 9.3.5 and tested it on Iphone 4S and IPod Touch ( 5th generation ) only.

He also said that he will release the first Beta soon and it will only support the two devices mentioned above.